The cancellation of the Ontario Hockey League’s 2020-21 season left many draft-eligible players with nowhere to go. Sidelined is a new series from Kyle Watson and Head Eastern Canada Scout, Dylan Galloway in which they will examine those players and how they might have progressed in their draft year.

It is difficult to emphasize how important a year can be for a player’s development – especially in the OHL, where teams can go from a contender to a bottom feeder in one offseason. Development paths aren’t always linear. Growth spurts can happen, playing time can greatly increase and players can have trouble adjusting to different leagues and systems.

One only has to look at the contrasting paths of top prospects Antonio Stranges and Jack Quinn last season for evidence.

For Connor Lockhart, the third overall pick in the 2019 OHL Priority Selection, this season would have provided another year living on his own, another year working with the Erie Otters coaching staff, and likely a promotion in the lineup.

Lockhart did not necessarily have a poor rookie campaign, but his totals of nine goals and 27 points in 57 games were bested by players selected below him such as Francesco Pinelli, Brett Harrison, and Wyatt Johnson – who all made Team Canada over him for the 2021 IIHF World Under 18 Championship. In his defense, Erie was one of the worst teams in the league. He also had to play the juggernaut London Knights and a strong Kitchener Rangers team a combined 10 games – in which he had just one point.

Had the season commenced, star defenseman Jamie Drysdale was supposed to return and be one of the best players in the league. Top scorers Chad Yetman and Max Golod were expected to have big seasons and the Otters were projected to be a much more competitive team.

The club moved centreman Hayden Fowler in the summer, perhaps to make room for Lockhart in the top six. Surrounded by a better team and given more responsibility on the ice, the Ottawa native could have taken significant strides this year.

Lockhart is a smart, skilled, and smooth skating offensive forward. It would have been particularly interesting to see his progression during his draft year as he had some great growth throughout his pre-draft season in the OHL.

Lockhart’s best skill in my eyes is his offensive awareness and ability to read the play through transition and in the offensive zone. His shifty skating combines really well with his creativity and allows for Lockhart to create in various ways off the rush.

A great display of his ability to be creative with the puck in the above sequence. Even though he doesn’t quite get around the defender for a clean chance, he obviously has the ability to use his puck skills to solve defenders. If he has improved his explosiveness during the layoff he could improve his chances of being able to take further advantage of attacking defenders’ heels. His explosiveness isn’t a concern but would take him to the next level and enable him to translate better.

In this sequence, Lockhart decides to dump the puck as he believes he can outskate the defender, 20-year-old Simon Rose (NB7), which proves to be true. NB7 has a slow turn and Lockhart burns him a bit from the inside. As previously mentioned above, Lockhart’s speed is only average or at best slightly above average, but he still manages to just barely gain the inside track on the puck. In addition, Lockhart shows that he can utilize his body positioning to beat bigger, older players in puck battles. He stick lifts and takes body position on NB7, directs him with his body, and maintains a good position on the puck. I like this play from Lockhart for a few reasons.

He will have almost certainly gotten stronger over the layoff, if not bigger as well. If that’s the case it will be more likely that he can pull off similar plays against even bigger and stronger players as he progresses through the pro levels. His intelligence to read the defenseman, solid body positioning instincts, and the ability to finish the play with a pass to the slot area are great things to see from such a young player.

One area I would have liked to have seen an improvement from in Lockhart’s game with a full draft age season is his shot selection. He has a proven ability to get to the high danger areas of the ice, but his shot chart is a bit more sprawling than I’d like to see. 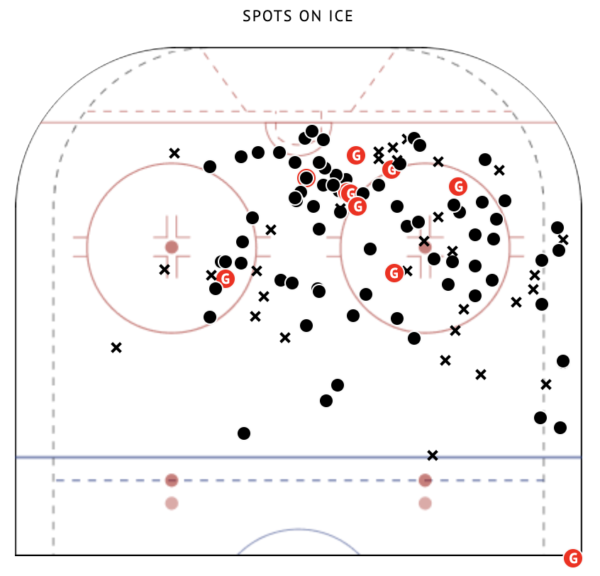 In the games I watched from his D-1 season, I noticed that he would often try shots that were just a bit too far from the optimal locations. It almost appeared like he was rushing his chance, and preferred to get the shot off, rather than getting to a location with a higher probability of going in. Here’s an example:

Lockhart is on the rush, calls for the pass, and has some time and space to work with. Instead, he rushes the chance, and his shot isn’t effective from this distance. The release is a bit slow as he takes a second to catch and wrangle the pass and move into a shooting motion. The puck comes off his stick with some decent speed though and he was attempting to catch the goalie moving from side to side while utilizing the defender as a screen. He just doesn’t have the power in his shot to beat goalies from the high slot like this and as we could see in his shot chart, he shoots from pretty much anywhere, but mostly scores from in tight. I would have liked to see some tightening of those shots around the home plate.

I’ve enjoyed watching Lockhart since his minor midget season and he has always shown that smart offensive flair and dynamic skating ability. His skills improved as last year went on and I felt that had he been given the chance to have a full draft year we would continue to see growth in his defensive game on top of the points made above. To me, Lockhart looks like his ceiling will be a middle-six scorer. His floor might make him more of a depth player if he doesn’t continue to improve his shot selection and calmness under pressure. More likely, Lockhart projects to be a bottom-six scorer who could really be a solid option on a team’s PP2 if given the opportunity.

The Pipeline: A conversation with Owen Pickering