One of the biggest enigmas of the draft class and someone I’m very curious to watch progress over the upcoming years is Sherbrooke Phoenix forward Joshua Roy. In short, I would describe Roy as one of the most talented and skilled hockey player you can find in the 2021 NHL Draft class, but someone who showed limited athletic abilities and careless inconsistencies in his compete level and focus.

So how can one evolve into such a dominant player with clear exposed flaws, and could it be possible for him to mature into an NHL player?

Passion and dedication to developing his craft, Roy found ways to survive and dominate at the highest junior levels despite his athletic shortcomings. His flourishing hockey skill doesn’t hurt, either. That said, due to his high-talent level, Roy was able to linger through his career to date by masking many of his drawbacks.

But the clear holes left in his skillset leave a certain edginess in scouts at the idea of selecting him.

Describing him as a typical middle-round gamble wouldn’t be fair to his talent level, so to get a better, clearer sense of what to expect with his development and potential, I’ve taken a look at every game of his this past season.

From following Alexis Lafreniere’s footsteps with a near goal-per-game pace at the Midget level to finishing fifth overall in QMJHL scoring with 22 goals this season, Roy’s best asset as always been his scoring prowess. He’s a fantastic scorer who can pick his spots at any moment thanks to his slick, pin-point accurate wrist shot. His fantastic touch seems to help him beat any goalie with precision alone, as even when lacking the sheer power of typical snipers, he possesses the instincts to find the back of the net.

Roy is at his scoring pinnacle when the play is settled and he can dissect shooting lanes. This makes him an absolute power play threat on the left board where he loves to curl towards the net and find the perfect spot.

With 22 goals in 35 games, he not only finished as the top scorer among QMJHL first year eligibles, but his performance compares favourably to some of the recent top prospects. 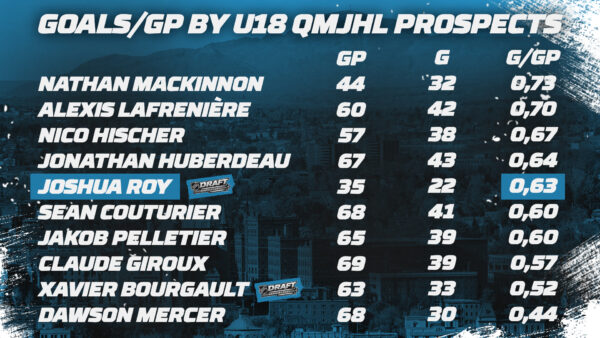 Adding to his scoring touch, Roy has a knack for getting open in dangerous areas.

When focused and alert, he possesses the instincts to navigate the slot and free himself in prime spots. The 6-foot forward owns a flair for rebounds, crashing and finishing in dirty sectors. He can also surprise defences by sneaking behind the play and offering a setup option to his partners.

Despite his superb scoring performances, there’s a lot Roy can improve and tweak to become an even more menacing sharpshooter.

His mechanics are mostly inefficient, as he frequently fails to lean in on his shot for additional power. He’s capable of being pretty accurate enough to beat goaltenders fair and square, but velocity is still a crucial part of a shot, especially climbing up to the pro-level. Some of his shots feel more like a lob than an actual blast, as he throws the puck on net without any purpose. Roy needs to show improved intent and aggressivity as a shooter.

Roy is a decent playmaker as well who highlighted the ability to set up partners with a great touch. The 190-pound prospect can locate available teammates and redirect the action extremely quickly.

He does particularly a great job of finding quick feeds in traffic and pressure situations — exhibiting thrilling spatial awareness. He relishes sending pucks to the crease when he sees circulation. Roy’s unfortunate flickering negligence can affect his passing accuracy, but when he’s focus and attentive to the game, he becomes a skilled passer.

Roy makes excellent reads in shot/pass situations, especially on the power play. Operating from the left flank, he loves feeding the bumper in the slot when the opposition steps up to block the shooting lane. I’d like to see him more decisive and elusive though. His tremendous shot attracts so much attention that adding a bit of deceptivity will open up so many options.

Roy possesses some high-end, electrifying puck skills as well as a terrific poise. This helps him navigate traffic with an astonishing ease, showcasing his incredible puck control simultaneously. He can beat forecheckers, dodge stick-checks, complete quick maneuvers in close areas and deke goaltenders thanks to his swift mitts.

He exhibited a combative stick as well to fight for the puck.

Roy showcased wonderful puck protection skills, revealing a tremendous balance to fight off checks, terrific pressure management, top-notch edge work, delightful lateral agility and excellent mechanics. He did a great job of shielding his puck with his body and stickhandling far away — neutralizing any access to the puck.

This first clip is a perfect example of it, showing Roy in excellent control of the puck despite the overwhelming reach of his 6-foot-8 opponent.

Despite a conflicting compete-level and an average athleticism, Roy actually showed excellent aptitudes in board battles.

The Saint-Georges-de-Beauce, QC product uses his lovely hockey senses to approach battles smartly. He enjoys finding the quickest path to the puck, compensating for his otherwise below-average speed. Roy also excels at slipping his body in between the puck and his rival to get possession of the puck first.

He shines when working from behind too, flashing an extremely rapid stick to surprise defenders and create takeaways. Roy displayed his improving upper-body strength with some occasional solid hits. He is definitely not the most active along the wall, but his great effectiveness is a radiation of his splendid potential.

Lack of Athleticism and Competitiveness

Roy has clear restrictions as a skater, displaying an inefficient stride as well as a lack of explosiveness and overall top-end speed. Besides his poor quickness, his lack of emphasis on putting up a constant effort prevents him from playing up to his full skating potential. He frequently moves around the ice unhurried and disorganized. His crossovers are sloppy, which restrain him from turning the corner with velocity and explode into open space. He simply starts foot-races at a disadvantage and is hardly ever seen as a menace in transition.

Roy lacks the foot-speed and strength to bypass anyone on the outside, offsetting multiple of his controlled zone entries. His poor quickness allows defenders to close out on him rapidly, which exposes his poor physicality.

He’s easily crushed, outmuscled and pin to the corners by defenders.

One of Roy’s biggest problems, and already one of the common themes in this article so far, is his shivering competitiveness and concentration. He can lose focus offensively, cheat on the breakout, throw careless, inaccurate passes by negligence, and have trouble keeping up in 1-on-1 defensive situations.

His deficient foot-speed allows quick attackers to sidestep around him or create separation with a quick stop, but a lot of it has to do with his effort level too.

The Recipe for Success

With his weaknesses in mind, what’s the recipe for success for Roy?

Outside of developing his athleticism off the ice, I’d like to see him focus on three things in the upcoming seasons: utilizing his passing skills in transition, staying active and aggressive with his feet, and putting the defensive effort.

Whenever Roy reunited these key points, he became much more impactful.

He showcased superb instincts and touch on his breakouts outlets. Extremely aware of his surroundings, he waved through pressure effortlessly and found partners with a simple glimpse. Roy possesses the dexterity to complete crafty, creative feeds on the move or send pucks ahead with a seamless touch. He was a highly-willing passer on entries as well, often finding the trailer with basic passes or lobbing it in front with delicacy.

Since his speed doesn’t allow him to threaten defences in transition, opening the play rapidly and facilitating others become crucial. I want to see him more consistently involved on the outbreak.

Keeping his feet animated and combative is probably the most important aspect to apprehend for Roy. When he’s able to stay mobile, he suddenly fuses to the offense with much more fluidity and his scoring brilliance is amplified.

He becomes aggressive, dynamic and even pest-like at times — pursuing the puck and crashing to open spots with energy. I absolutely love to see him quickly relocate himself into open spots after a pass, drawing multiple additional scoring chances. Although seeing him assertive on the forecheck is encouraging, I don’t envision Roy fulfilling any forechecking role, but I do hope to see him focus and energized. Don’t settle into exclusively making plays in a static position — use your instincts.

Most of the following clips might feel unimpressive, but those are incredibly uplifting actions for Roy.

Roy has had trouble with his defensive play most of his young hockey career, specifically his effort level, but when he’s enthusiastic about the idea of backchecking, he can actually be pretty fruitful. As the season went along, I saw him slowly but surely strive to help on the defensive side of the puck more and more often.

He occasionally chased down wingers to negate their options, or quietly guarded the extra man to counterbalance any potential odd man rush. He showcased a quick, disruptive stick as well to create takeaways from behind. But even when Roy wasn’t the one stopping the transition, his presence allowed him to recover a few loose pucks and restart the attack smoothly.

Roy improved his cycle defence as well. His lateral quickness is quite acceptable when he challenges himself, which helps him defend on the perimeter. He persevered through traffic to get steals and could put himself into shooting lanes.

Ultimately, Roy is a boom-or-bust prospect who, with his intriguing skill set, shown the upside to transform into an offensive weapon at the next level. His pace, hands and shot are reminiscent of Tyler Toffoli, which could be a great model for his game.

Roy has a ton to improve and his road to the NHL will be a long, challenging one. That said, having shown flashes of improvement in every aspect of his play, I would be willing to take a gamble on him with a third round selection.

Some will perceive Roy’s competitiveness and skating as red flags.

I see it as an opportunity to snatch a great hockey player at a lower spot than usual.

Prospects from each team to watch in rookie camp tournaments