The Analysis: A deep look at Gavin Bryant’s game

Count me a fan of Gavin Bryant.

Bryant is a talented playmaker and two-way center for the Owen Sound Attack. He has 20 points (seven goals, 13 points) in 35 games this season, and was one of my favourite players coming into the 2020 OHL Priority Selection.

A former captain of the U16 AAA Brantford 99er’s in the ALLIANCE, Bryant is unlisted in FCHockey’s Midterm ranking for the 2020 NHL Draft, but does rank on NHL Central Scouting’s midterm ranking at NO. 160.

Bryant’s ranking will only go up as he continues to get more OHL experience, and this deep dive will further explain why that is.

Bryant is an incredible playmaker and gets many of his assists down low among the half-boards, where he is usually under pressure. In this clip, he makes an incredible effort to pick off an errant pass — showcasing his strong forechecking abilities — and keeps puck possession during a  1V4 situation. He then uses his hands and mobility to keep puck possession along the boards under pressure from two defenders before making an incredible tape-to-tape pass to a streaking teammate in the high slot.

After the play, he is seen hustling back to play defense on the ensuing Flint breakout.

Bryant is a very smooth perimeter player, and one of his best playmaking skills is his ability to visualize where his teammates are going to be, draw in pressure, and take defenders out of the play while protecting the puck before pivoting his body and passing at the right moment. In this clip, he does all of this and makes a very smart pass to Mark Wooley, who walks in uncontested and gets a clean shot off for a goal.

Bryant is very good at keeping his head up and understanding defensive coverages and where his teammates are going/need to be on the ice, and this clip illustrates that perfectly. Bryant receives the puck down low on his off wing and spots his defenseman, activating off the blue line and moving in towards the net. He makes a nice tape-to-tape pass through three Sting defenders and his teammate has a scoring chance on a wide-open net that he puts wide. This particular play would have been Bryant’s fifth point of the night.

This example also shows off Bryant’s vision while winning puck battles. Bryant keeps his head up to where the play is going and makes a nice move to push off the defender to create separation. This allows him to make a beautiful one touch pass to the open wing and his teammate Colby Barlow scores an open net goal because of it.

In the below clip, Bryant enters the zone on a 3V3 and immediately notices a breakdown in Guelph’s defensive zone coverage and spots the trailer, Colby Barlow, wide open. Bryant makes a quick pass through a Guelph defender, and Barlow gets a clean look at the net and scores.

Bryant is an incredible forechecker who is always hard on the puck and makes life difficult for the opposing teams defenders on the breakout.

The beginning of this example shows off Bryant’s tenacity on the forecheck. He immediately picks off an errant pass along the boards and gets a high-danger shot on net. The rest of the clip showcases his compete as he consistently cycles around the offensive zone, finding open ice and creates another scoring chance in front of the net with a backhand pass to the slot.

The end of the clip shows off his hand eye as he deflects a point shot and almost scores.

One thing that makes Bryant an intriguing prospect is his two-way game. He covers very well in all three zones and is particularly adept at covering in front of his own net. He will often direct teammates where to go in the defensive zone and cover for defenders when they put themselves out of position.

In this example, Bryant does a good job of covering down low defensively. He follows the Barrie forward in front of the net well by getting back into position after being shoved out of the play, tracking the rebound and getting inside positioning to knock away a scoring chance.

Both of the following examples, above and below, showcase Bryant’s defensive zone awareness and slot defense capabilities. In the first video, Bryant identifies the open man, delays his attack and then pounces on the puck, stripping it away from the Knights forward and allowing his team to move the puck up ice.

In the second example, Bryant immediately notices where the play is going and breaks up the scoring chance with an active stick.

Bryant is a reliable penalty killer for the Attack and averages over two minutes per game shorthanded.

The start of the above clip shows off his strength as a neutral zone defender, and his consistent pressure on the Soo Greyhounds power play makes it difficult for them to get a clean zone entry. When they do gain entry, Bryant’s awareness of where the play is going puts him in a position to pick off an errant pass and clear the zone. On this shift, the Attack’s penalty killers effectively nullified 30 seconds of power play time with Bryant leading the charge.

In this above example, Bryant loses the draw but recovers his positioning and moves over to take away a shooting lane and cut down the angle for the Firebirds defender. He then stays in his team’s box position and pounces on a loose puck and helps clear the zone. He plays aggressive on the forecheck and covers the puck-carrier well, interrupting his time and space and blocking a cross-ice pass. He then wins a puck battle for a loose puck over two Flint Firebirds players and plays it back to his defenseman, who clears the puck out of the zone.

Shooting the puck is not necessarily an area of Bryant’s game he can improve on, but it is something that he doesn’t do enough of.

He currently ranks fourth-last on the Attack in shot attempts with only 1.42 per game. However, he also averages 1.13 shots on goal a game, which shows that when he does shoot the puck, it is typically on net.

The following shot maps for Bryant this season also highlights that he typically does not shoot the puck outside of the slot. This was a concern I had for him in his OHL draft year, as he almost never shot the puck from anywhere past the hashmarks. This has carried into the OHL and is something I would like to see him work on to add another weapon to his arsenal.

Having a heavier shot will add another dimension to Bryant’s game and make him harder to read for defenders. 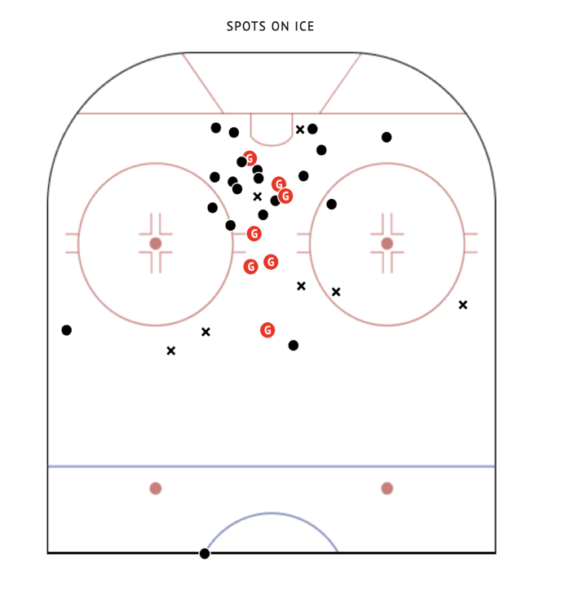 Another area of Bryant’s game that he needs to work on is his faceoffs. He has one of the lowest faceoff percentages on his team at 35 percent, but conversely, he also takes the most faceoffs on average Owen Sound at 12 per game. The picture below shows that he is relatively decent at faceoffs on his strong side — left side as a left-handed shot — and is not very effective whenever he is on the right side of the ice.

Learning how to take faceoffs on his forehand is something that Bryant will have to work on, and something I believe will improve over time as he adjusts to the OHL and grows into his frame. He has a wide skating stance, good balance and power on his skates which will provide him with a solid foundation to win draws, he just needs to work on his timing and body positioning off the faceoff. 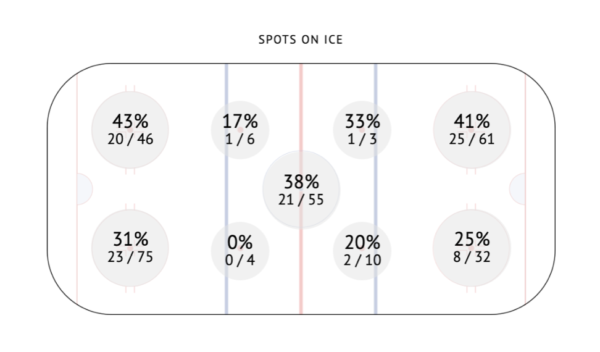 Even though he may not be the flashiest name in the draft, I believe that Bryant has a future in professional hockey and should go in the fourth or fifth round in the 2022 draft. I’ve been following Bryant’s game since 2019, and I think he does some things incredibly well that, alongside his competitiveness and tenacity, will help set him apart from his peers.

Bryant is a very strong playmaker who possesses incredible vision. He can recognize where his teammates and opposing defenders are moving on the ice and can capitalize on defensive breakdowns. He consistently delivers tape-to-tape passes and hits his teammates in motion. He doesn’t panic under pressure and uses his IQ to recognize the time and space he has with the puck. His wide skating stance and strong edges/balance also help him with his puck control and ability to not get moved off the puck.

Defensively, Bryant has a stronger two-way game then most sophomores in the OHL. He covers very well in his own end and communicates where his teammates need to go to effectively defend. His ability to shadow players and use his stick to interrupt passing lanes and shot attempts is also a strength that a lot of young players in the OHL don’t possess.

He is an intriguing prospect that is years away from making it to the next level, but I believe he can make the jump and succeed as a Swiss Army-type bottom-six, penalty killer.

He is a player whose development is one that you will want track after the 2022 NHL Draft.

The top highlights from Day 4 at the World Juniors